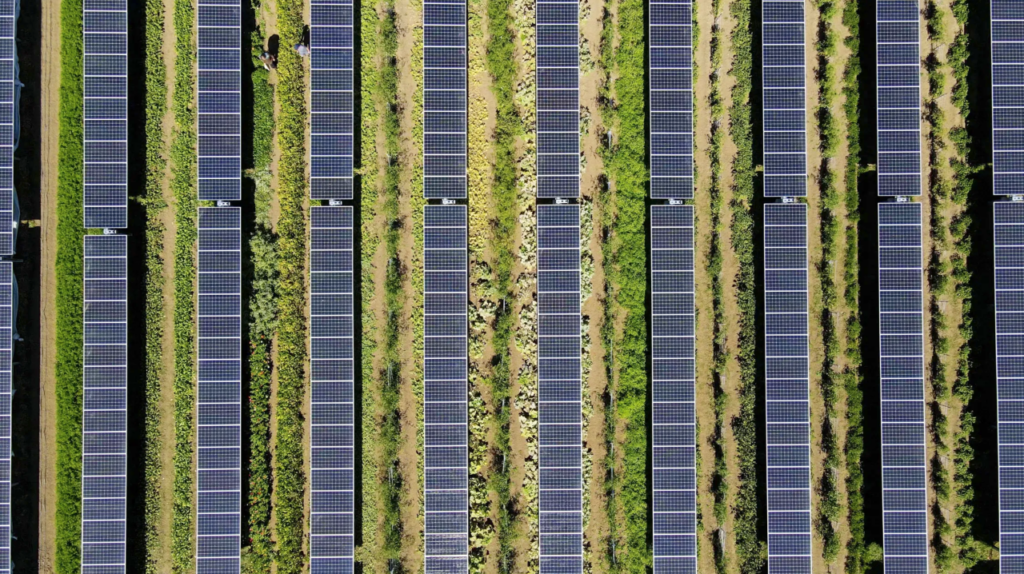 The Kansas Reflector welcomes opinion pieces from writers who share our goal of expanding the conversation about how public policy affects the daily lives of people across our state. Pam Martin has covered agricultural issues as editor of the St. John News and as a reporter/photographer for the Great Bend Tribune. She continues to keep herself informed on agricultural and environmental issues and is the president of Women for Kansas Barton County Chapter.

Imagine fields of solar panels with crops growing under them, tilting up and down, depending on the needs of the plant, the solar energy and the grower.

Imagine Kansas adding solar power to its diverse agriculture and energy portfolio, providing not only economical power and new agricultural opportunities to our state, but to the country as well.

It’s time to stop thinking that agriculture and solar farms are mutually exclusive and focus on how they work together. Agriculture and solar fields are not competing industries. According to Stacker data analysis website. Combining agriculture, the state’s biggest economic and industrial engine, with solar power results in an economic juggernaut.

Kansas is strategically positioned to lead in the relatively new field of agrivoltaics. Recent research shows that in areas with high solar radiation and temperature, certain crops growing under solar panels have an advantage. The western half of Kansas meets this definition, and computer models of climate change show Kansas getting hotter, drier, and sunnier.

Agrivoltaic developed in the 2000s. In 2019, Greg Barron-Gafford, a professor in the School of Geography, Development and Environment at the University of Arizona, published the results of 10 years research on growing vegetables and herbs under solar panels. He and his team found the production of peppers was three times higher, and the tomato, twice higher, under solar panels than under direct sun.

The same research found that irrigation is more efficient under solar panels than on uncovered cropland. Crop growth was sustained for days rather than hours after irrigation and soil moisture remained higher in the agrivoltaic system. This is good news for those who live with limited water resources.

The extra moisture, transpired into the air by the plants, cools the solar panels, increasing their efficiency. As the panels heat up, their efficiency decreases. Cooler temperatures for workers harvesting and working on crops are another benefit.

The agricultural industries of solar grazing and solar beekeeping take advantage of the grasses and flowering plants that grow under and along the edges of solar fields. Sheep, the most common solar grazing animal, benefit from shading from solar panels. By grazing plants under and around the panels, sheep prevent the proliferation of plants that could shade the panels. In addition to energy production, the zones provide agricultural income. Similarly, commercial beekeepers are partnering with solar growers, taking advantage of native plants around and under solar panels for nectar sources, also benefiting declining native pollinators.

As these new agricultural industries develop, entrepreneurs forge ahead. Bryon Kominek installed the largest commercially active agrivoltaic system on his land in Boulder County, Colorado, and Heartland Farms in Rush County, Kansas, is considering applying for a USDA grant to install a small agrivoltaic system.

The next step is research and implementation. Further agrivoltaic research has received a boost, with a recent USDA grant of $10 million awarded to six partners. The four-year study extends research into which crops and locations are best suited for agrivoltaic systems, as well as the design and placement of solar panels to maintain or increase crop yields.

Kansas has the investments available.

We have bipartisan infrastructure bill funding for climate change initiatives and a $2.9 billion surplus in state coffers, enough to divert funds to project research and development agriculture and solar energy.

We have bipartisan infrastructure bill funding for climate change initiatives and a $2.9 billion surplus in state coffers, enough to divert funds to project research and development agriculture and solar energy. We have a premier agricultural research facility at Kansas State University. Establishing a solar technician training program at one of our community and technical colleges would address the shortage of technicians. Providing public incentives for solar installation would encourage development.

Increased investment from large companies seeking carbon offsets is needed, with the Department of Commerce working on recruitment. Target, Google and Jack Daniels financed much of the Colby wind farm for carbon offsetting, according to Midwest Energy communications director Mike Morley.

You can help by contacting your State Representative and Senator, encouraging them to support solar installation incentives, seeking funding, and contacting the State Board of Regents, encouraging solar technician training programs. As of this writing, Kansas Senate Bills 481, 324, and 279, which restrict wind and solar projects, are before the Senate Utilities Committee. When home agrivoltaic systems are available (several companies are working on them), buy them and use them to reduce your own carbon footprint.

Kansas has the resources and the potential to lead in solar energy and sustainable agricultural production. The time for imagination is over. The time for action has arrived.

Through its opinion section, the Kansas Reflector works to amplify the voices of people who are affected by public policies or excluded from public debate. Find information, including how to submit your own review, here.