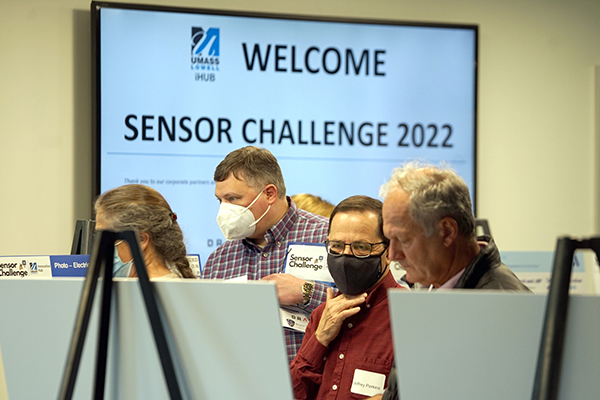 Sensory overload: Startups rise to the challenge of UML sensors

A wireless patch that would enable 24/7 blood pressure monitoring – and could revolutionize the diagnosis and treatment of hypertension – has won UMass Lowell’s inaugural Sensor Challenge, which took place recently held at the Innovation Hub in downtown Lowell.

The pitch competition featured 10 startups from across the region that are developing sensor-based technologies. They competed for $30,000 in prizes.

“We want to learn as much as possible about the entrepreneur community, and this is one of the many ways we can support them,” said Arlene Parquette, Associate Vice-Chancellor for Industry Partnerships and Economic Development. “We’ve had a lot of great candidates and we’re grateful to have them here.”

“We’re using an ultrasonic sensor that fits in a Lego man’s hand – it’s so small,” said Nancy Briefs, an ARTritech consultant who presented the winning speech.

Fueled by the Internet of Things, or the connection of physical devices to the Internet, the global sensor market is expected to double over the next few years, from $167 billion in 2019 to $346 billion in 2028, according to Allied Market. Research.

Sensors can detect physical inputs such as light, heat, motion, humidity, and pressure and convert them into a readable signal. They can be used for monitoring in a wide range of industries including medicine, automotive, agriculture and aerospace.

A second prize of $10,000 went to myBiometry, which uses a patented sensor, mobile app and device to alert a user of an impending asthma attack.

Ian Goodine, a mechanical engineering student at UMass Amherst, won the third prize of $5,000 for his company rStream Recycling, which uses artificial intelligence technology to keep contaminated items out of the recycling stream.

The in-kind award may be used for office space at the Innovation Center, as well as the use of manufacturing space and basic research facilities.

The event included a keynote address from Dave Cadogan, president of Moonprint Solutions, a company that develops products and technologies for NASA and the Department of Defense.

Alice Lin, CEO of ALLL Enterprise Corp., had planned to attend the competition and present her company’s solution of using nano-ionic water and nano-microbubbles to recycle biomass waste in the agricultural industry. When she missed her flight, she called on Lidan Cao, a third-year doctoral student. electrical engineering student, to deliver her pitch.

“There are a lot of really impressive projects here,” said Cao, whose research focuses on fiber optic sensing technology. “If they can make them marketable, a lot of good things can happen.”