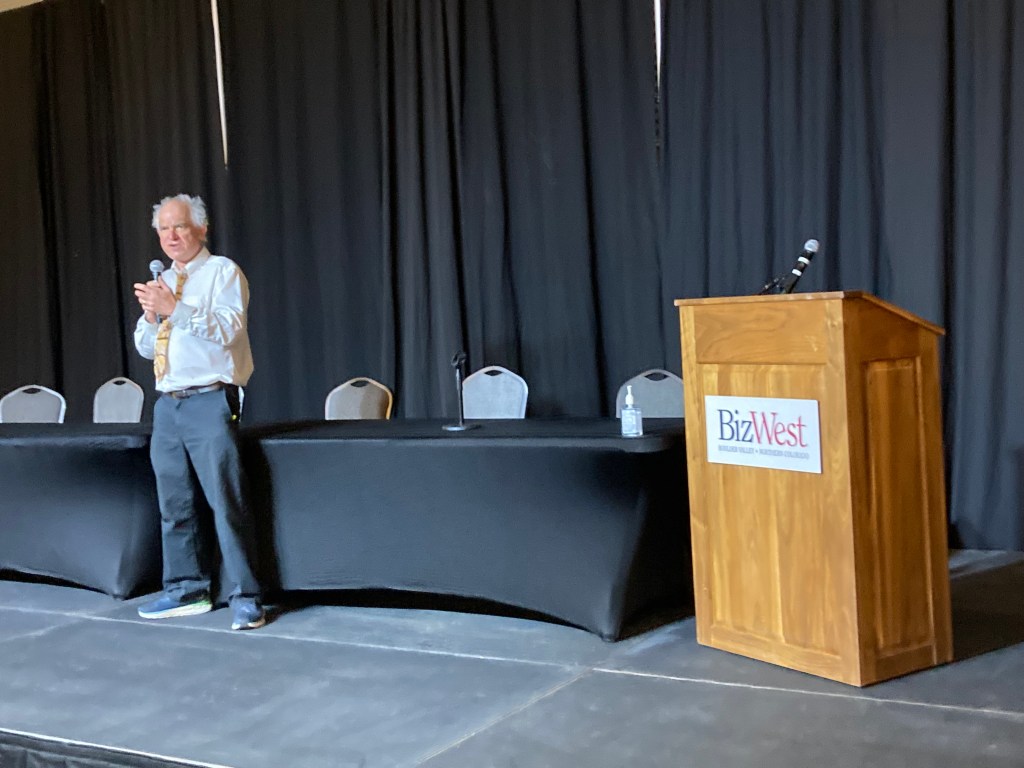 LOVELAND — Will Toor, director of the Colorado Bureau of Energy, has been riding a wave of what he described as “pent-up demand for conservation legislation” since Governor Jared Polis was elected and control of the Legislative Assembly by a Democratic majority.

And this wave encompasses all major economic sectors that generate greenhouse gases: utilities, transportation, the oil and gas industry, building energy use, and industry.

Toor was the keynote speaker at the BizWest Net Zero Cities event held Wednesday at the Ranch event complex in Loveland.

The most comprehensive legislation, Toor said, was the passage of House Bill 19-1261, which set greenhouse gas reduction targets of 50% by 2030 and 90% by by 2050. Everything else fell below that using regulatory and fiscal measures to help drive change.

Toor said the state has put climate issues at the heart of utility regulation. “It took the voluntary aspirations of Xcel and put them into law,” he said. Then, these were designed to apply to other state utilities as well. The state also began calculating the social costs of carbon and methane emissions and applying them to the regulatory structures created.

The effect of regulation as well as voluntary acts by utilities – to derive economic benefit from the lower costs of generating electricity from wind or solar compared to what it costs to generate electricity from coal – led to a projected 80% reduction in greenhouse gases from utilities by 2030, well ahead of the target. Xcel, the state’s largest power producer, will likely phase out all coal generation by 2031, Toor said.

“It wasn’t that long ago that Colorado was one of the biggest coal consumers in the country,” he said. “It’s a remarkable transformation.”

The state has also emphasized “just transition” for coal-mining communities such as Pueblo, Hayden and Craig, where coal-fired power plants are an important part of the local economy. Amortization provisions have been put in place to help these communities, he said.

Toor said a 60% target has been set for the oil and gas industry to reduce its greenhouse gas emissions. He said strategies include a higher frequency of leak detection and repair. Companies in the sector will be required to develop individualized plans to achieve the targets.

Reductions in the industrial sector will be slower than with utilities and the oil and gas industry, and efforts are underway with national and international companies to ensure that an industry does not just shift its emissions to another part of the world where the regulations are less strict. strict.

The greenhouse gas reduction target for industry is 20%, he said.

Strategies include facility audits looking for profitable opportunities and technologies that industries would then be required to implement.

Toor cited the Pueblo steel mill which, thanks to recent investments, is now among the most efficient in the world because it uses an electric arc furnace to produce the steel. “It’s getting closer to something like zero-emission steel production,” he said.

Buildings, as well as the transport sector, pose problems of scale, because “you have millions of generators” of greenhouse gases. The state is “creating a set of tools to decarbonize buildings,” he said. Tools could include the use of electric heat pumps instead of more traditional heating systems. Senate Bill 246 established rebates for customers who add heat pumps, as well as a state “green bank” to help building owners fund some of the changes.

The objective in this economic sector is a 20% reduction in greenhouse gas emissions.

Now that utilities are on track to reduce their emissions, the transportation sector is the biggest generator of greenhouse gases.

“Obviously this involves a lot of different people, from local governments to individuals, making decisions about what vehicles they’re going to get and where they’re going to live versus work,” Toor said.

The state will make major investments in electric vehicle infrastructure — statewide charging stations, for example — and incentives for vehicle fleets, including school buses.

“The diesel school bus for some children causes the highest exposure to air pollution in their lifetime,” he said. Once these buses are replaced with battery-powered fleets, the state may have the option of operating these batteries during off-peak hours to store excess solar power.

In response to a question about what is not being done to address climate change, Toor said he was interested in land use as a factor in energy decisions – “building houses where the jobs are found”.

He also said nuclear power generation was among the technologies the state may need to use to achieve 100% renewable energy. “When you look beyond 2030, how do you go from 90% to 100%,” he asked. Nuclear and hydrogen technologies can be part of the solutions, but “very few utilities are considering nuclear” right now.

This article was first published by BizWest, an independent news agency, and is published under a license agreement. © 2022 BizWestMedia LLC.